…while seeking the muse

Last  you heard,  I was rabbiting on about the new outhouse in the back garden. There has been a long silence since that episode, but I did not fall down the hole! As a good friend pointed out recently, there has been a dark cloud hanging overhead this year. This might explain why I have been feeling a little under par, a little short on creative energy, why I have not written for so long.

2018 has been an epic year of loss. I have not got enough fingers on my two hands to count the folks I know who have left this good Earth since the  beginning of 2018; some due to illness or old age, others suddenly and without warning. Just over a year ago I nearly lost C. In May my mother, at home in a foreign country, barely survived a debilitating stroke. As luck would have it, we are all still here, or there, at least for the time being. The cumulative losses of 2018 have thrown me for a bit of a  loop.

The number of extreme natural events that have taken place during the last year have caused mayhem for many more. Though I am not familiar with all the people who have been  affected by these disasters, I do know some of them. There have been forest fires, volcanoes, earthquakes, hurricanes, typhoons, tsunamis and floods; homes and lives lost. Extreme discomfort and devastation were experienced by many in the wake of 2018.

Pear tree knocked over by bear

This year I turned sixty. As if that wasn’t bad enough, a big black bear came along just in time for my birthday, ransacking the  orchard and vegetable garden, flattening portions of the garden fence.  Again we were lucky. Despite sharing our harvest with the bear, we still ended up with an ample supply of fresh produce. 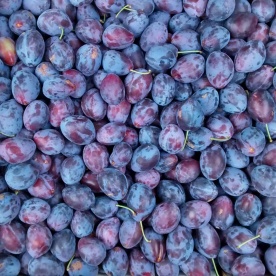 And then the cat died! Our dear old Leo, a lovely tabby cat with white socks and mittens, finally gave up the ghost at a ripe old twenty years of age! A lucky fellow, he got to use up all his nine lives. He has now been laid to rest alongside his former fellow pets under the black walnut tree out back. 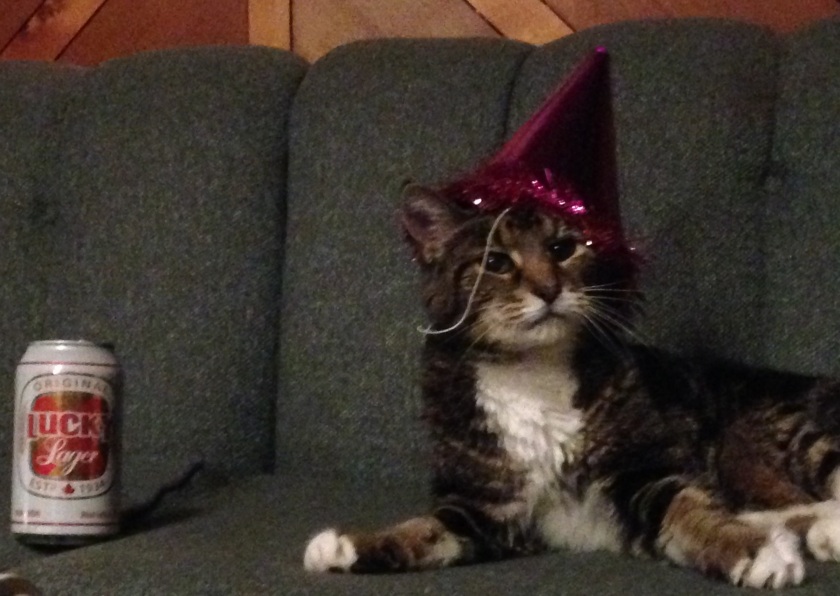 Part of our family since he was a weanling, Leo had roughly the equivalent of 100 human years and was ready to go.  His loss was really a blessing in disguise. Still, it’s sad and we do miss him. On the bright side, we still have the black and white Cisco, though “bright” might be a bit of a stretch!

Just as I thought life was settling down there was more bad news. The last thing I heard before hitting the hay on Christmas Eve was that our dear friend B. had just dropped dead at his local Legion hall. I heard he had been standing next to the lottery machine at the time; I’m not sure if he was buying a ticket or not but like to think he is having a good chuckle somewhere out there in the great beyond!

My loyal, sober, rough-diamond friend, you will be missed!  You, who among many other things, famously survived a black bear assault a decade ago  while cleaning a salmon in your docked boat. I’m sorry I did not see you before you left, but so glad that we were able to exchange a few happy messages just days before you checked out.

On a lighter note, winter 2018 has been pretty green so far; a typical wet west coast winter. It’s been easier on the firewood, easier for boating and driving, less troublesome logistically. Two days ago real winter finally did assert itself, snowing all day, plastering the ground with sloppy  white stuff. The snow is almost gone now. The sun has been shining on this last day of the year. 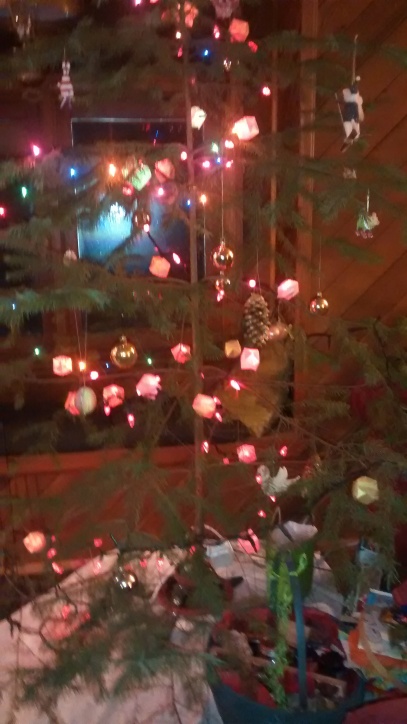 Christmas was a lovely, peaceful family affair, off-island, away from our own island home and the endless chores. I have been reading some fellow off-grid island bloggers’ posts; gleaning inspiration, seeking the muse. Like us, they arrived home after holiday celebrations laden with a ton of gear and supplies; loaded, reloaded, and finally unloaded, in mid-winter semi-darkness after a damp and chilly skiff ride. Everyone jumping to get the fire roaring, the kettle on, the supper happening,  wandering around in a sleepy daze while icy pellets of rain danced staccato on the rooftop. Now, several days later, our house is just about up to a comfortable temperature once again.

On this relatively remote island we are always off the grid. Unlike family and friends living on electrified islands to the south of us, we were not seriously affected by the raging wind storm that hit the west coast just before Christmas. On the southern islands the power was really out. Normal activity had ceased. Daily living as well as holiday festivities were seriously affected. Many are still struggling with the power outages that began about ten days ago, coming to terms with the damage and losses suffered as a result of the storm.

Thanks to the investment we’ve made in our own alternative energy systems, and providing everything is functioning as it should be, we have all the off-grid electricity we need to power lights, communications systems, the refrigerator, the freezer. At this time of year especially, when the weather is often foul and we are not always able to get to town, we must be well-provisioned and prepared to spend weeks at a time at home. The pre-Christmas storm has been a wake-up call for a lot of folks. Perhaps for some, 2019 will be the year of really getting off the grid; of becoming even more self-sufficient.

As this year draws to a close, I remember the loved ones who are gone now and hope the new year brings peace to their survivors. I wish you all the very best for a healthy, happy and enlightened New Year.

16 thoughts on “Farewell to Fine Friends…”