…just a walk in the woods

Forest Bathing, or shinrin-yoku, is a relatively modern term first coined in Japan by health and wellness advocates during the 1980’s. Humans have been practising forest bathing, perhaps not always consciously, since we first started interacting with the  forests of the earth many thousands of years ago.

Shinrin-yoku literally means “taking in the forest atmosphere” and refers to the beneficial practise of spending time under the canopy of a living forest. Through their work, mainly Japanese and South Korean researchers have been helping to establish shinrin-yoku and the practise of “forest therapy” around the world. 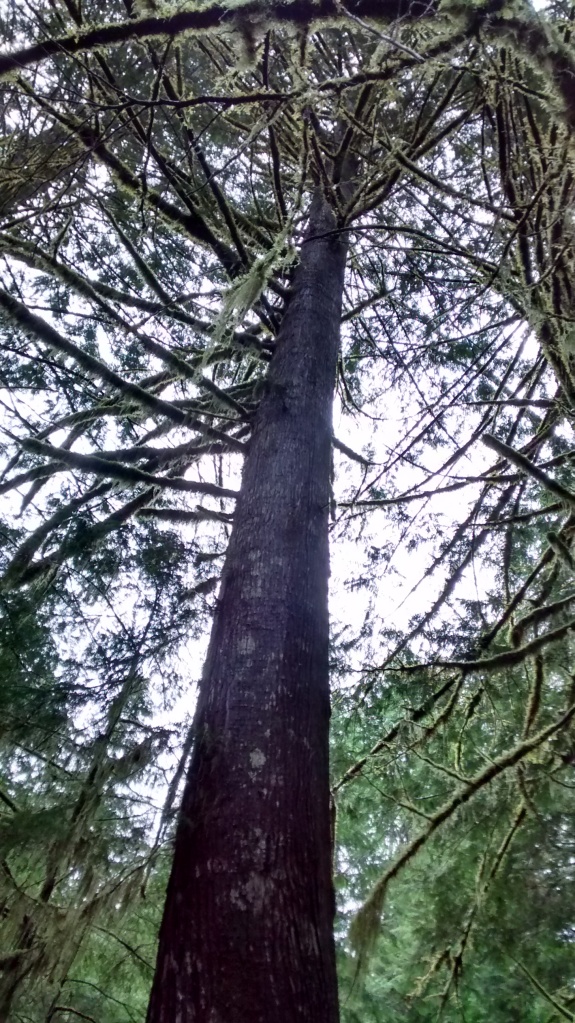 Forest bathing is as simple as going for a walk in the woods. It has been described as a gentle path of wellness accessible to almost everyone. By visiting a natural area and walking in a relaxed way one soon begins to feel the calming, rejuvenating and restorative effects of the practise. The scientifically proven benefits of shinrin-yoku include improved immune system function, reduced blood pressure, reduced stress, improved mood, an increased ability to focus, increased energy, and an improvement in one’s sleep.

According to Shinrin-yoku.org, making forest bathing part of one’s regular practise will result in deeper and clearer intuition, an increased flow of energy, increased capacity to communicate with the land and its species, increased flow of life force, deepening of friendships and an increase in one’s overall sense of happiness. This organization even offers forest bathing guide training programs for those seeking a holistic career choice; a new/old “medicine” for health practitioners to prescribe for their under-the-weather patients? With very few negative side effects, what is there to lose?

We’ve had a mild winter on the coast with quite a lot of rain and some very windy days. Many large trees on the south coast of British Columbia have fallen victim to these wind storms. Just a note about that: it’s not a good idea to practise shinrin-yoku during high winds. This is when nature is busy doing its forest “pruning”; falling limbs and trees can be very hazardous to one’s health! 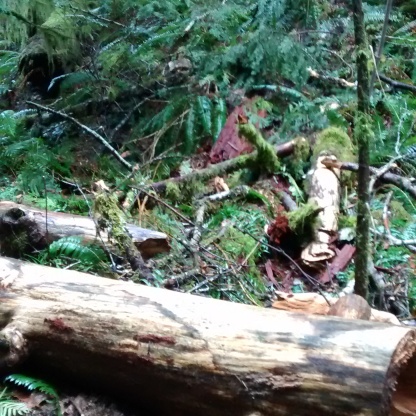 I’ve been hibernating indoors lately due to heavy rains, and general after-Christmas laziness. I had fallen out of my habit of going for a daily walk in the forest, due in part to the aforementioned windy weather. The other day, overwhelmed with things that I ought to be doing, not knowing where to begin, I decided to clear my head and set off for a long overdue “walk around the block” as we call our version of shinrin-yoku.

I headed off into the forest behind our house. Through swaths of sword fern I waded, over the swollen creek, so full of rushing water that it flowed over its banks, creating new pathways of least resistance on its way to the sea. 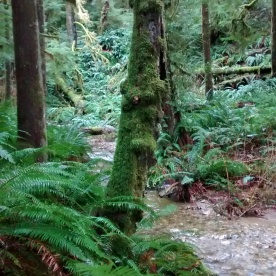 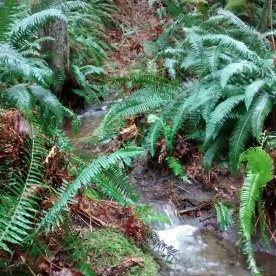 Along the path we have established through the forest, I walked, taking time to notice the clean, oxygen-rich air that flowed around me like cool water. The creek bubbling along on one side of the path, made a gurgling, chuckling sound as it meandered through the forest.

I walked on a soft green cushion of step moss, past the ancient decaying stumps of the first growth forest that fell to the crosscut saw over a hundred years ago when the earliest loggers came to these islands. The stumps stand like sentinels, testament to the first forest that grew on this land. The distance between these old growth stumps is a stark reminder of what giants those trees were compared to the second growth youngsters that grow here now.

Ambling along, some of the other species that inhabit the forest caught my eye. Bright orange witch’s butter grows on bits of decomposing organic matter on the moss covered ground. The recent winds have scattered remnants of dragon’s skin (a type of lichen that grows on mature big leaf maples) across the forest floor. 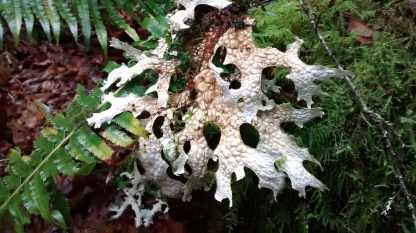 There are many other lichens, mosses and fungi growing, on the ground, up the trees, and into the canopy as far as one can see; all are part of the complex structure of the living, evolving, temperate rainforest that we call home. 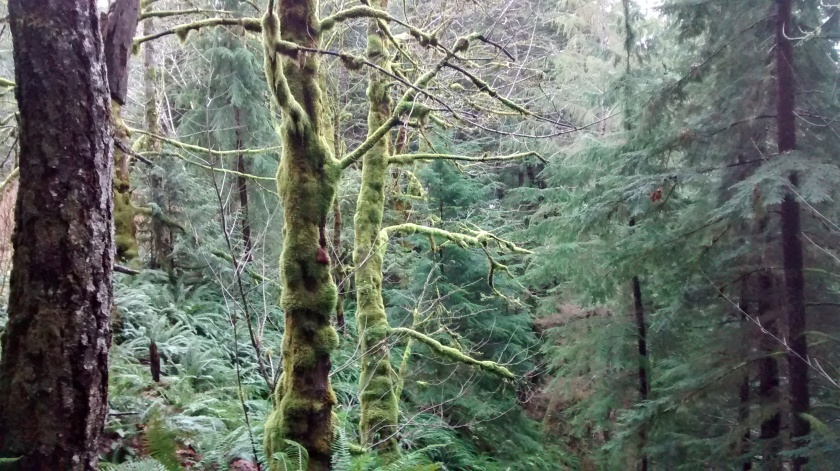 I met a few birds here and there, a couple of tiny wrens and a flicker flitted across my path. It is early still but more birds will show up in the coming months to begin their nest building. One or two tiny Douglas squirrels perched in trees along the way, chattering feistily as I passed by. All of us felt slightly giddy in the premature spring-like conditions! 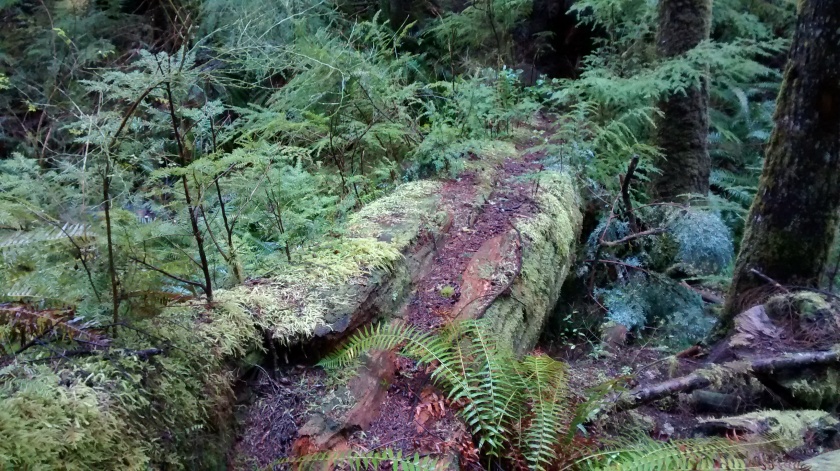 There is a giant fallen fir, a nurse log, crossing the second creek I come to on my forest ramble. It serves as a bridge to the other side of the ravine through which the little stream travels. 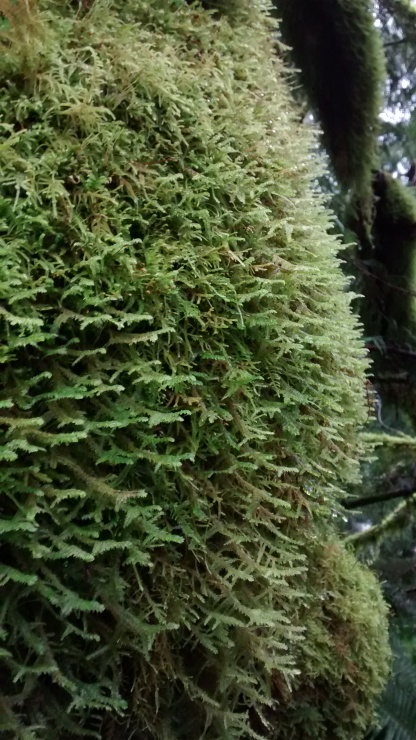 I follow this route leading past moss covered maple trees and a view across the big beach and up the channel towards my neighbours’ place. There is a cedar tree growing here that I could put my arms around when I first came to live here, between the forest and the sea, nearly 30 years ago. I can no longer give that tree a full-body hug, its girth has expanded and my arms are not long enough to reach round it now.

Walking along I finally come to the orchard, planted in a clearing near the edge of the forest. I have not got to the pruning yet, though the bear who came to visit last fall helped a bit with that job. We have raised the bear-savaged pear tree. It has been pulled upright with a come-along and is guy-wired in place. We are hoping for a full recovery. 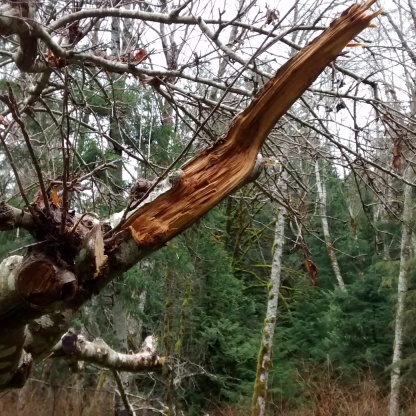 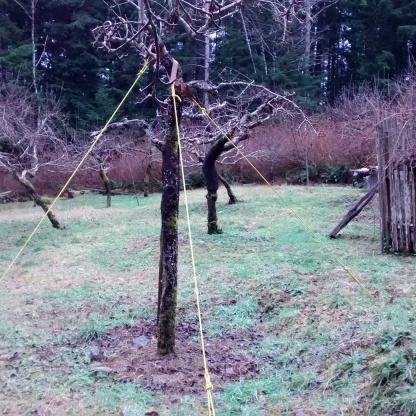 Back at the house I put the kettle on for tea. Thinking about my walk and the concept of forest bathing, I realize how far removed from nature the modern human being has become; how everyone and the planet we all share, would benefit if we could only find our way back to nature along the forest path.