…and Spring is Just Around the Corner. 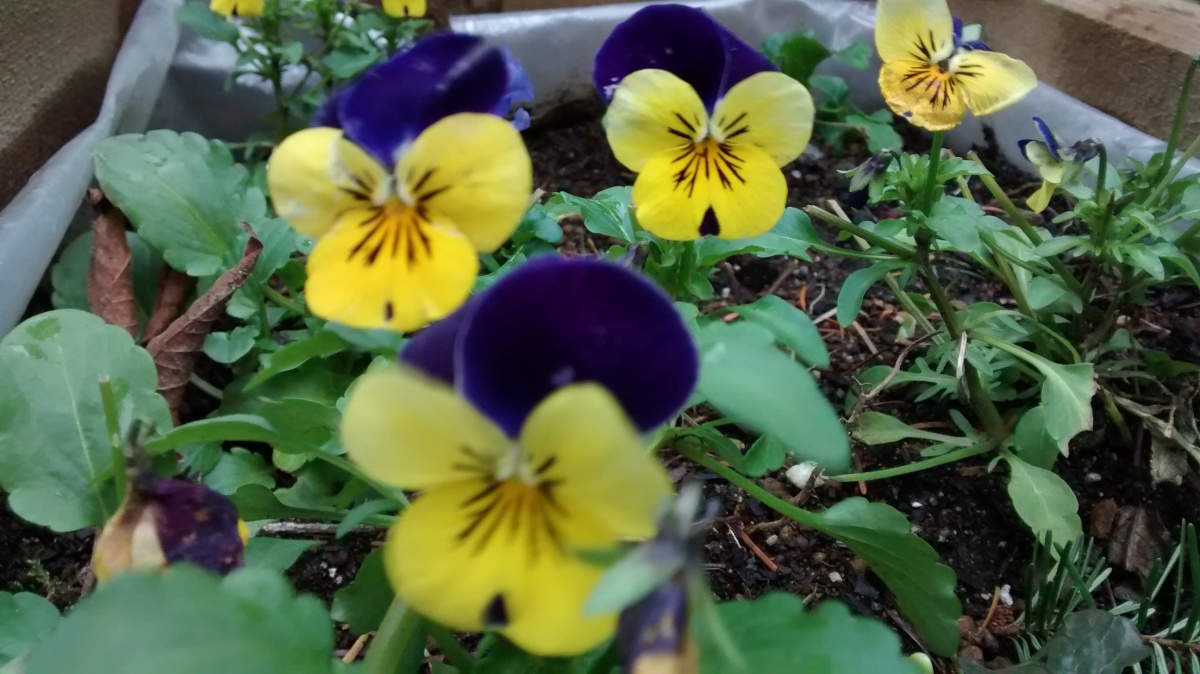 Spring seemed to be just around the corner. I could feel it in the air.

Actually, I could feel it in the rain. It has been a mild winter at home on the island, on the wet west coast. Unlike last year when we were slogging around knee deep in snow for months on end, this winter we’ve had just a couple of light snowfalls, lasting only a few days each. 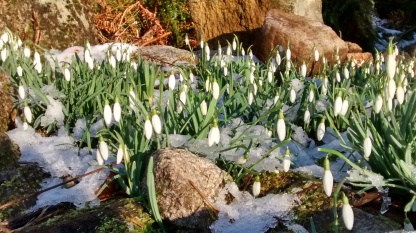 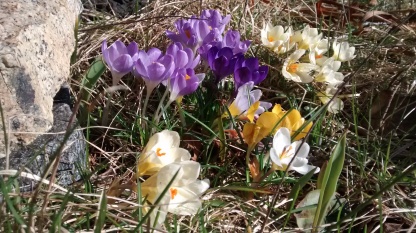 Spring is a tease. Just as the sun appeared and the snowdrops and early crocuses began to bloom, it snowed again! We had a light dusting, like sprinkled icing sugar, the evening before Valentine’s Day, enough to confirm that winter is not yet over. Today it is cold again.

This winter has been busy but not difficult, weather-wise, at least. The ever-changing yet mild weather has kept me interested in the great outdoors. A small but steady display of winter-flowering plants, both indoors and out, has helped sustain my spirit through the darkest days.

I picked my last bouquet of the year shortly before Remembrance Day; a bunch of hot pink cosmos and bright orange calendula brightened up the kitchen for a few late autumn days before the weather began to lean towards winter. 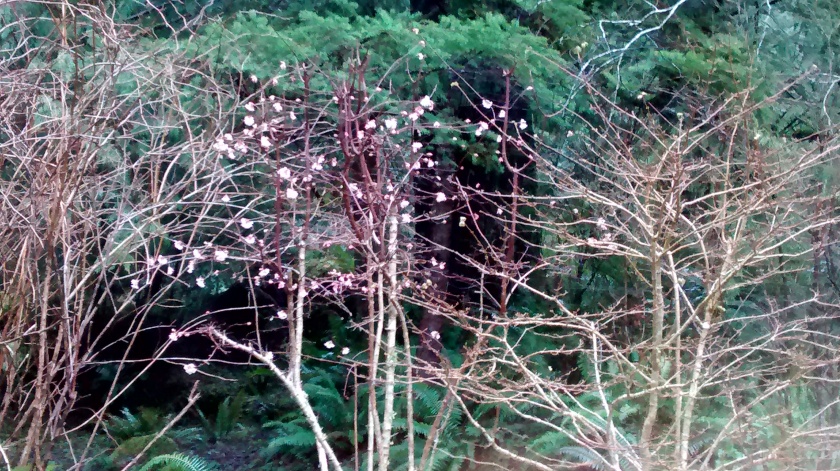 Every year by mid-November, the winter-flowering viburnum (V. fragrans) begins to show its clusters of pink, honey-scented blossom. My heart sings when I see it budding at the edge of my yard where it borders the dark green forest. It will continue to bloom, no matter what the weather throws at it, until March. 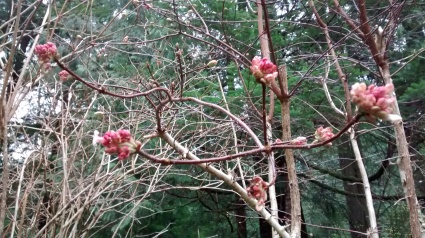 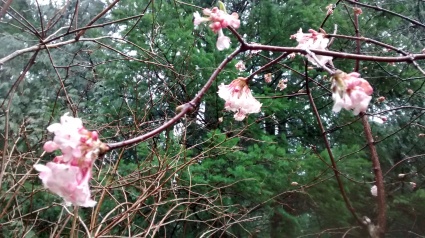 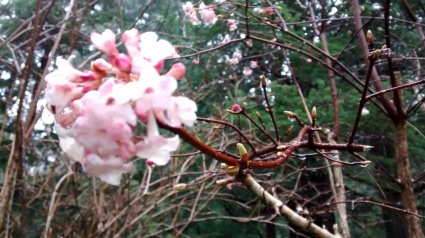 Winter-flowering viburnum blossoms are extremely hardy. I have seen the buds encased in solid ice, to emerge unscathed, when snipped for pretty winter bouquets on the kitchen table. All types of viburnum can be easily propagated by layering. Bend a flexible, low-growing branch to the ground, weight the branch with a large rock where the branch touches the ground, leave it for a year or so, and it will begin to root itself. Once a good root system is established, the new plant is severed from the mother, potted up and grown on, or set out in a somewhat sunny spot to grow permanently.

I have an amaryllis bulb (Hippeastrum) in a small pot that spends the summers soaking up the sunshine out of doors, along with the geraniums, fuchsias and succulent Christmas cacti (Schlumbergera bridgesii). Just before the first frost, I brought the amaryllis and its companions inside for the winter, to keep them all from freezing to death. I cut back the geraniums and the fuchsias, keeping the cuttings in a jar of water on the kitchen window sill to root for next summer’s garden. The Christmas cacti were soon ablaze with their exotic, salmon, pink and magenta blossoms.

Sometime in early December I noticed the amaryllis had sprouted a large flower bud or two. I brought the potted plant into the warm kitchen and placed it on the table where I could watch its progress. Throughout the dead of winter, the huge, blood-red blossoms gradually unfurled. C. said the emerging blooms were straight out of  the  “Little Shop of Horrors”. I was thrilled by the thick, fleshy, tropical flowers. 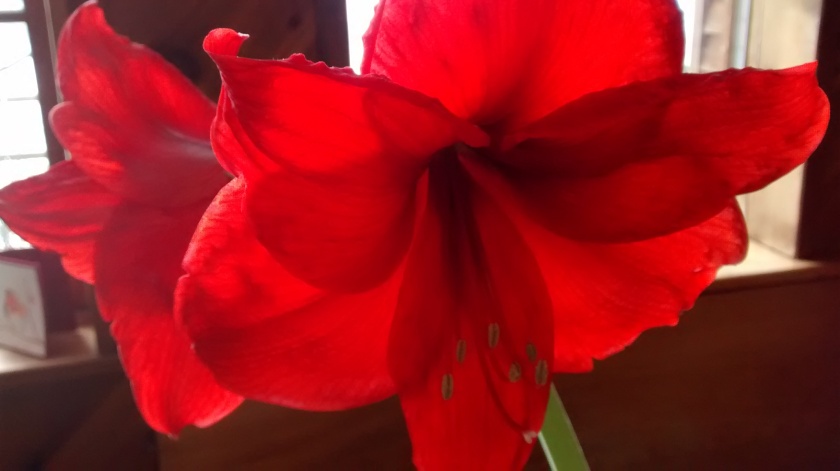 After a month of showy bloom, the amaryllis petals finally darkened, dried and began to drop off. I cut the flower stalk right back, gave the plant a bit of Miracle Grow-enhanced water, and set it in a cool, well-lit spot in the living room to grow its leaves and begin replenishing its bulb for next year. If I pot up the spent bulb into a larger container before putting it back outside for the summer, it should begin to multiply and produce more bulbs, each with a flower stalk of its own.

Last fall, in the empty wooden planter box on the front porch, where the geranium and fuchsia cuttings had grown all summer, I planted a variety of sweet-scented, narcissus bulbs. These are now pushing up through the compost rich potting soil, and someday soon they will begin to bloom. For contrast and to fill in the gaps I added some Johnny-Jump-Ups (Viola tricolor). 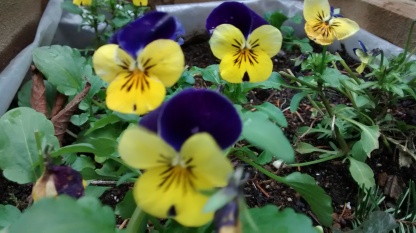 These little purple, yellow and blue pansies are tough and have been blooming all winter long, through rain and wind, snow and frost. In the late winter sunshine their little lion faces shine. I hope they will eventually self-seed freely as they are known to do.

In the back garden there are a couple of forsythia bushes which are budding up well. Early in February I took the shears to one of these. Clipping some of the tallest branches that were interfering with the clothesline, I brought a big bunch inside, stuck the cut ends in a pottery jar full of water, and placed them at the far end of the living room where it is a bit cooler. The bright yellow forsythia buds have since opened; a sunny reminder of spring.

Not long ago a certain three-year old I am getting to know asked why there are plants inside the house. At Christmas I had given his mother a bowl full of  scented narcissus bulbs that I hoped would soon be blooming in her family’s new home. 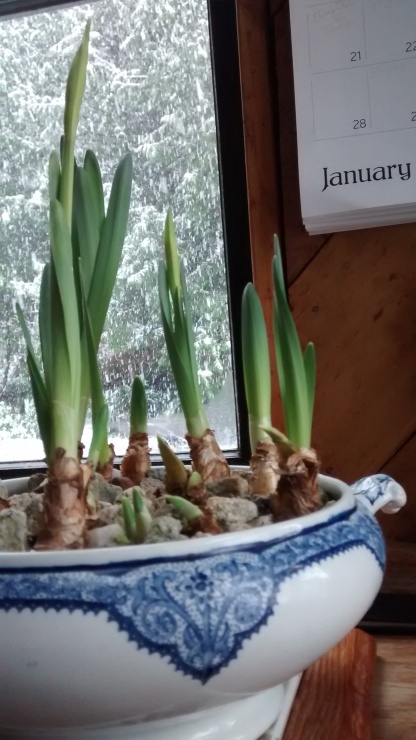 I thought about it for a moment before replying. Flowers and plants brought, or grown, indoors are a cheerful, natural way to introduce some extra joy into the family home. They are a symbol of love. Flowering plants inside the home are a hopeful reminder that the longer, warmer days of spring are just around the corner.

8 thoughts on “The Flowers of Winter…”