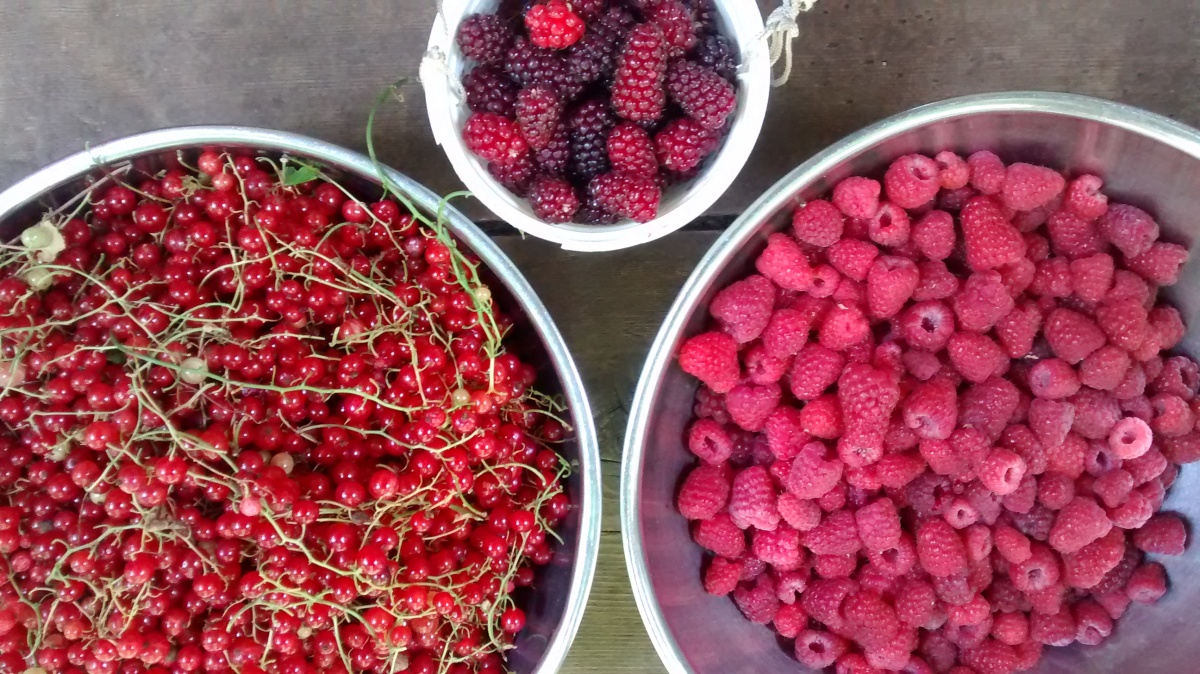 I have been up to my eyeballs in berries all summer long. The berry season began early in June with the first red currants of the season. 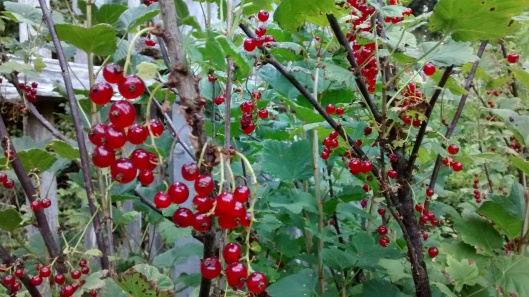 By mid-June the raspberries were also in full swing. I picked raspberries every day for nearly two months. This summer I decided to weigh the raspberries at the end of each day’s picking. By the middle of August I had picked over 60 pounds of the ripe red berries from the two rows that grow in our garden. 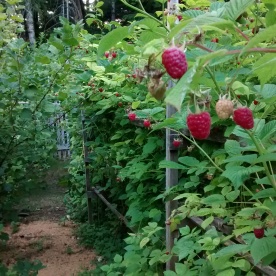 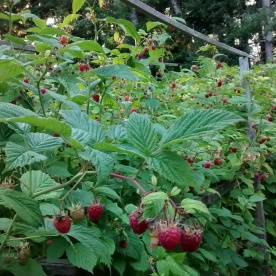 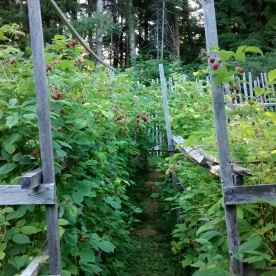 At the same time the boysenberries, related to wild bramble berries, were ripening on their vines. 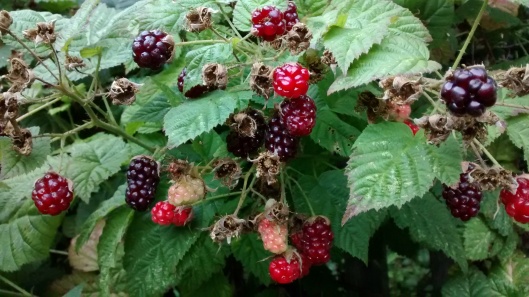 The blueberries began to ripen sometime in July. I picked blueberries every day in an attempt to beat the birds to the ripest berries. I did not get around to weighing in but estimate that I picked about 25 pounds of blueberries from four productive bushes. 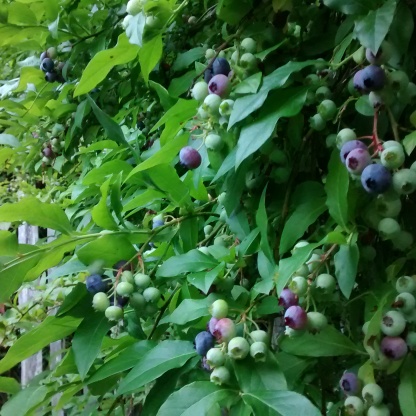 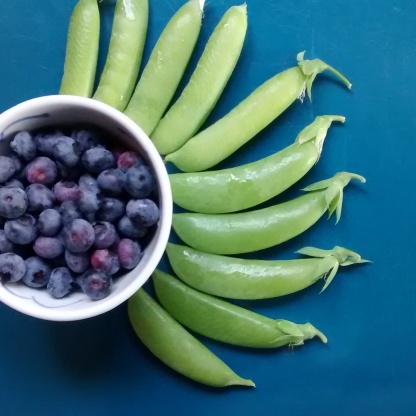 This year, unlike previous ones, my berry patch was not plagued by invasions of robins, song sparrows, wood pigeons, Steller’s jay, or marauding native squirrels.  There were a few visiting birds, mainly a small flock of cedar waxwings, which I love to watch. I didn’t mind sharing a few of my berries with those hungry birds.

One native red squirrel came along late in the season to help himself to some of the last raspberries, but apart from that there was very little loss to wild creatures. I credit this to the fact that the wild huckleberry and elderberry bushes were also fully loaded with an abundance of fruit and that the wild birds prefer to forage where I am not actively gardening or picking the berries myself. Or perhaps it has to do with the barred owl whose hoots I have heard nearby.

When I was a kid, living in the countryside, I remember hearing that a heavy crop of berries is a sign of a hard winter to come. Last summer our berry bushes were also heavily laden with fruit, and indeed we did have a long and snowy winter. We shall see what happens this coming winter and whether or not there is some truth to the folklore.

What to do with all of the berries that have been picked? I’ve given some to my girls, grown up and living away from home now, with kitchens of their own, and their own meals to prepare. C. and I have eaten as many as we could; fresh, straight off the bush and warmed to a glowing sweetness by the sun or in a bowl with cream or yogurt for dessert. I have been freezing the rest in plastic bags to store for use later in the winter, to be baked in crumbles, cakes and pies or whizzed up in a breakfast smoothie. 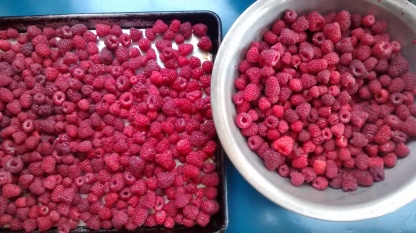 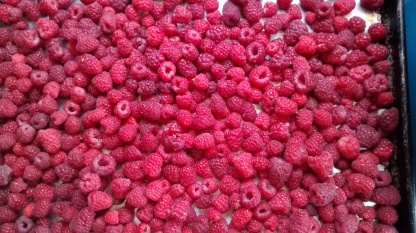 We have two chest freezers to store our year’s supply of venison, salmon and berries. As summer approaches and the weather gets dryer, our supply of off-grid electricity produced with the micro-hydro system dwindles. It becomes necessary to reduce the amount of electricity we consume in whatever way we can. By the time our power supply is diminished, we have normally used up most of the contents of at least one of the freezers so it is not a big deal to reorganize and repack the remainder into a single deep freeze. We  then shut the second freezer down until the fall when the rain returns and the micro-hydro system  again becomes viable enough to run two freezers.

Often by the end of June the solar panels alone are almost enough to generate the electricity required to charge our battery bank in order to power the one remaining deep-freeze, a small refrigerator and a light or two in the evenings. On summer days when the sun does not shine (and the creek for hydro power has dried up) we must augment the solar power by running the old Lister diesel generator in order to top up the batteries.

Beautiful British Columbia has been on fire  most of this summer. It is the worst fire season ever recorded in the history of this province. Fortunately we have not had any fires on our island, so far. A total fire ban is in effect at the moment which, fingers crossed,  will be respected by all. Still, for a couple of weeks when the  wind changed and began to blow out of the mainland inlets, we were blanketed with a thick pall of wildfire smoke. 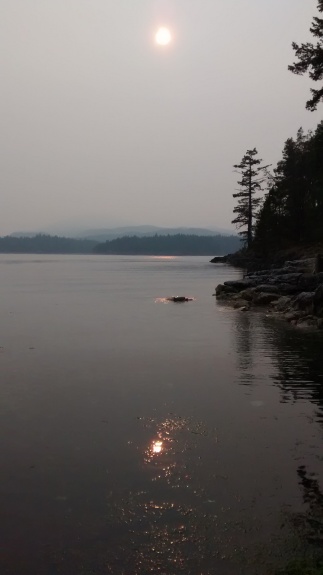 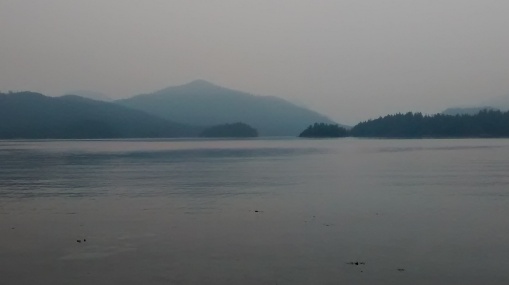 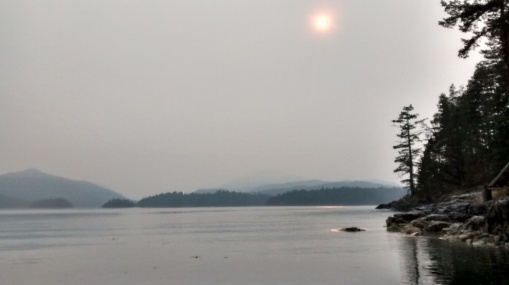 The atmosphere was heavy and hot, oppressive with the smoke. Everything smelled like an old fireplace. I felt there was not enough oxygen in the air. What we experienced was minor compared to what folks in the fire zone have been contending with. Still, it was not a pleasant experience. As well, the obliteration of sunshine, making it somehow cool and hot at the same time, meant that our solar panels could not function properly and so I have been forced to run the generator in order to produce enough electricity for our needs.

Although the smoke finally cleared, the overcast skies  prevailed for a while and the solar panels were  not able to keep up with the demand for electricity. So, Mister Lister carried on in the evenings, topping up the battery bank to keep the appliances functioning.

Soon enough the rain will fall again, the creek will fill and the micro-hydro system will once again be producing more electricity than we will be able to use.

Thankfully the offshore breeze has returned and the air is once again fresh with the tang of the sea. Berry season is officially over; the apples are ripening and I am currently up to my ears in tomatoes and zucchini, but the freezer is already filled to the brim. There are still berries left over from last year! I will use these to make some jam or perhaps a bottle or two of berry cordial which, sealed in Mason jars or snap-top bottles, will help fill the pantry shelves and brighten up our long winter days.

As it turns out, it wasn’t just the wildfire smoke from the interior of the province that was causing our solar panels to not work properly. A couple of days ago C. was home, enjoying a rare day off, when he noticed the panels weren’t charging as they ought to. Upon further investigation he discovered that a loose connection combined with some corrosion was causing the solar panel wires that feed into the main line to short out! Sparks flying around with dry bits of grass and moss just below what had become a very hot connection!! Yikes!! Good thing he noticed this problem before we had our very own wildfire to contend with. He quickly resolved the issue by cleaning up the connections with a bit of emery cloth before tightening them up securely.

The solar panels are back in business now, generating lots of electricity and the jam-making is about to begin. Moral of the story: As with stirring jam, check your connections frequently, and make sure they (as well as the jars) are clean and tight!

Place 4 cups of berries (raspberries, blueberries, blackberries, boysenberries, currants) fresh or frozen, in a heavy bottomed pot. For berries that are not high in natural pectin, such as strawberries or huckleberries, add the juice of a lemon or two or grate an apple or two into the pot along with the berries. Crush a few of the berries to release some of the juice. Bring berries to the boil, stirring with a wooden spoon to prevent scorching. Pre-cook over medium heat for fifteen minutes. Add 3 cups of granulated sugar, stirring to dissolve. Bring to a rapid boil and cook over moderately high heat, stirring often. Boil for fifteen minutes, or until the jam “sheets” off a clean metal spoon, or until it measures 218 to 221 degrees Fahrenheit on a candy thermometer. Remove from heat and skim the foam off with a clean metal spoon. Carefully pour jam into sterilized glass jars, wiping rims before sealing with hot, sterile lids and screw bands. 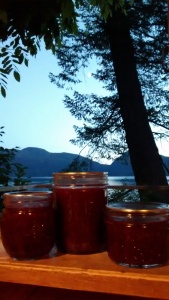 Jars may seal on their own as they cool but to ensure a good seal, jars should be placed in a boiling water bath for ten minutes. Cool completely, label and store in a cool, dry, dark pantry or cupboard. Recipe yields about 6 cups of finished jam. Recipe may be doubled, but for best results keep batches to no more than 8 cups of fruit at a time. 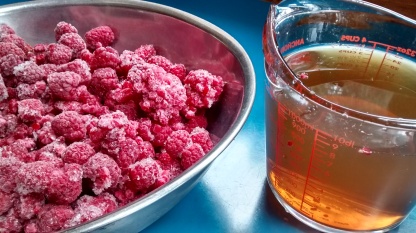 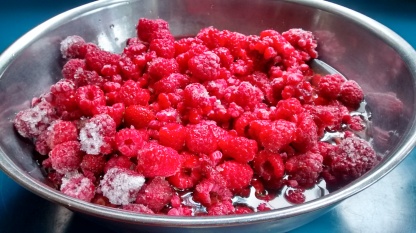 Use a potato masher to crush the berries if desired, or leave them whole for a clearer finished product. Let this mixture stand in a cool place for 48 hours or so. Strain the liquid and use it to cover another 2 quarts of ripe berries, crushed or not, for another 48 hours.

Strain once again and measure the liquid into a non-reactive saucepan. Add an equal measure, or slightly less, of granulated sugar. Bring to a boil, stirring to dissolve the sugar and prevent scorching, and simmer for 10 minutes. Skim and cool slightly before bottling in sterile glass flip-top bottles or sealed Mason jars.

Label and store on your pantry shelf. Recipe yields about 2 ½ litres of cordial. To serve, place a tablespoon or two in a glass with ice and top up with sparkling or still water.

This berry-vinegar syrup may also be used to make a delicious berry vinaigrette salad dressing. Just whisk a tablespoon or two together with some virgin olive oil, some fresh lemon juice and a pinch of salt and pepper to taste. 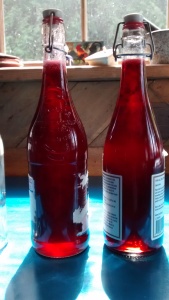