….home from the hill

Yesterday afternoon I went down to the end of the road in the skiff to collect C. and his mountain of winter-camping gear. He was coming home from his annual hunting trip to the Interior of the province.

Ever since I dropped C. off two weeks ago I have been holding the fort here at home. The weather has been wet and mild, until a couple of days ago, when the season turned the corner to reveal winter coming down the pipeline. As I write, an icy wind is beginning to stir, a storm is brewing.

C. has been going off on expeditions like this every November since I came to join him on this island nearly 25 years ago. He has spent the last two weeks camping in a canvas wall tent, complete with a wood-fired heater, along with his brother and adult son, quietly hiking around the hills of the Interior of the province, looking for mule deer that live in that region.

Hunting deer for food is something C. has always done, since he was a small boy growing up on a once rural island on the south coast of the province. This is something not easily explained to urban folk, or vegetarians or others who may not understand the whole story of living off the land. It is a story that is embedded in some people’s DNA, just the way that growing a vegetable garden or catching a fish is in others. In part it is a natural survival instinct. Hunting for food is also a way of appreciating nature’s bounty,  if exercised in a compassionate and respectful manner.

C. is a very good provider, and his family has always benefited from his skills as a successful hunter and fisherman. We are fortunate to have such a natural and wholesome diet, and it is something for which we all have great respect. Being omnivorous, and living far from the grocery stores, we have always eaten whatever can be hunted, gathered in the area or harvested from our garden. Of course we supplement these with the things we cannot forage or grow, bought at the store on trips to town. 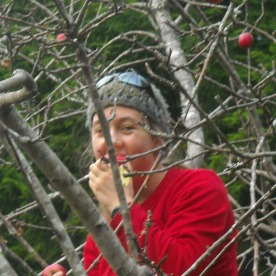 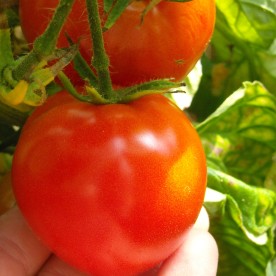 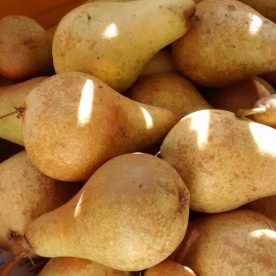 Deer meat has always been one of our main sources of protein. We are grateful that our lean and healthful meat has spent its life in its natural environment, browsing on leaves and brush, not in a crowded feed lot on a diet enriched with growth hormones or antibiotics, ending up on a plastic covered Styrofoam tray in the supermarket. 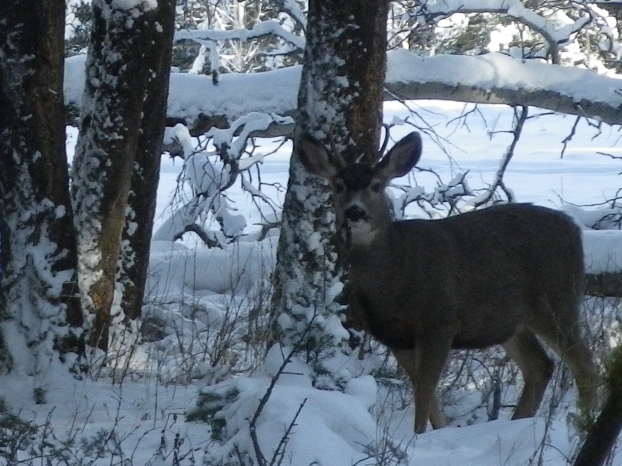 Growing up in the bush, our girls have always been very aware of the natural world around them. They have happily participated in and are still appreciative of our way of life. They grew up learning how to look after themselves, both on and off the island. The specific skills acquired growing up on the island included how to grow a garden, how to catch a fish, how to prepare food from scratch, how to handle a gun safely and properly. 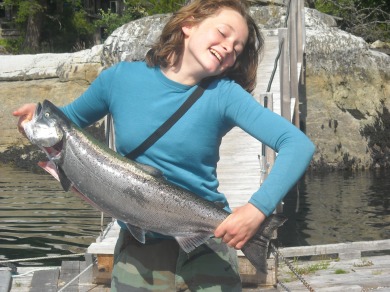 Both girls took the firearms safety courses, required by law, when they were old enough to do so in order to acquire their hunting licenses. Only F. became a hunter. It was something that she chose to do. It is a way to spend special time with her Dad in nature, just the two of them, hiking around the islands, looking for sign, listening carefully, observing the weather, the birds, the vegetation and the views. Keeping an eye peeled for just the right buck. It is also one way that F., an accomplished cook, satisfies her interest in self-provisioning.

Like her father, F. is compassionate about the deer they have shot. Neither of them enjoys taking the life of a beautiful buck, and it is only with careful thought and deliberation that the shot is fired, as skillfully as can be, with little if any trauma to the animal.

The processing of venison has always been a family affair. This task has provided a perfect opportunity to work together as a team, turning the whole deer, brought home after a successful hunt, into the neatly packaged parcels of meat that provide us with the foundation for many delicious meals.

When F. came home last week to butcher her deer, it was hanging in the shed, having been field-dressed on site after being shot during a morning hunt with C. the week before. We had already shared the liver and the heart, fried quickly with some onions, and the last of the garden tomatoes. A few rashers of bacon would have been delicious, if there had been any in the fridge.

F. prepared the counter in the laundry room at the back of our house, where it is cool and where there is a big sink with hot and cold running water. A large board was placed on the counter for cutting. Several large bowls to collect the pieces of meat prior to wrapping and a selection of sharp knives were laid out ready for the task of butchering.

In the shed F. set about removing the deer’s hide using her sharp, folding pocket knife. This was one of the first tasks in the business of butchering that the girls learned. They were good at it and eager to help, using their small, red Swiss army knives. Over the years C. has discovered that it is better to leave the hide on the deer until butchering time. Other hunters often remove the hide as soon as the deer is hung up by its back legs soon after slaughtering. Our experience is that the flesh stays cleaner and does not become dried out, which requires more trimming at butchering time, resulting in more waste.

After skinning the deer, F. cut the carcass in half length-wise down the spine from tail to neck, using an electric reciprocating saw. Then each half was cut in half again by sawing across the narrow part below the rib cage. She carried each quarter from the shed to the back porch and into the laundry room where one at a time they were laid out on the counter top. There she began the task of cutting the quarters into hip, shoulder, and loin roasts, neck pot roasts, steaks, chops, stewing bits, ribs and brisket pieces. 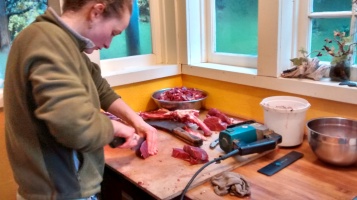 I gathered together the plastic freezer bags, a roll of brown freezer paper, masking tape and a Sharpie permanent marker. Clearing off the kitchen table I began to wrap and label the pieces of lean deer meat as F. cut them up. 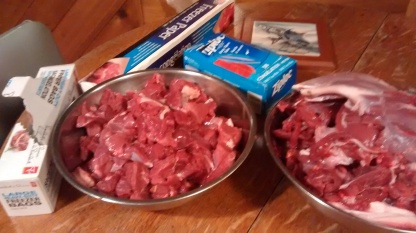 Every scrap of the carcass is used, the less tender bits being cut off the bone, to be ground into mince, some of which will be made into tasty sausages. Even the bones are not wasted but are pressure cooked with water to produce a rich and flavourful broth which will be frozen or canned for soup-making.

It took about three hours to cut and wrap F.’s deer. We put the pieces into the freezer until the following day when F. went home with a cooler full of brown paper packages for her freezer, a good supply of meat for the coming winter.

When I met C. at the end of the road yesterday he did not come empty handed. Along with the pile of gear was a very large mule deer buck. Next week we will spend a whole day or two processing the magnificent animal. Over the next year or so this bounty will be shared with the rest of the family who will be pleased to receive the wholesome, natural meat, a precious gift of Mother Nature.